As the Rebbe teaches, there is only one true reality, but many false human constructs

And the one true reality, revealed from Kabbalah through the Rebbe, in his final major address is as follows: life is an eternal, cosmic, development process

Both collectively and individually, we are, shall and eternally will, advance

This advancement occurs through a three stage process:

For example, man started off as barbarian

He felt the Rebbe effectively is calling us to action – I felt that the Rebbe is waking us up to a new paradigm – in other words, the Rebbe’s call, though it leads to action is not about action; rather, it is a reality check – “You are not living in exile – the past hell that you have been through is over – you are now living in redemption! – The present bliss – Freedom – Secrets of the Torah never ever ever before revealed to humanity, through Chassidus – Gentiles not only, not harming Jews, but wishing them, and identifying with Israel, and actually giving money for Jews to relocate to Israel! – A world (generally, excluding Arabs) that forever engaged in wars, bloodshed, murder, With a basic premise to promote life, democracy, working together! – this is not an accident, this is the messianic world!!!”

As the Rebbe says, He is promoting Moshiach “for the sake of joy!!!”

Happiness or depression is dependent on a single factor, Hope or Depression – lack of hope: (

Fundamentally as the Alter Rebbe teaches us, we can either believe we deserve what we get, hence with everything we get – as often happens in marriage – we believe we are now entitled to more – hence nothing can ever make such a person (maybe you and me) happy, for as you can easily see, you can never get more, if more is you fundamental position!

If on the other hand, we change our fundamental position, believing, which is the truth, that fundamentally we shouldn’t even have been born, our and every single living thing’s existence is a mere gift of a loving creator who made us in his image out of the greatest act of love (as it states it is the nature of a loving giver to do so) hence, we will never get upset at anything, for whatever we have is good luck and whatever we don’t – well we’re still pretty damn lucky!!!

The final frontier, the apex, the point that there is no further point, ultimately, the redemption, the destination, the goal of humanity!

For thousands of years humanity struggled in darkness!

Humanity has a few contradictory elements which need to be incorporated in order for life to be perfect.

These are, amongst others, serenity, as well as constant growth; which seem to be in contradiction to one another; for to be serene, we think of relaxing on a beach, while to be productive we think of a sense of anxiety, stress, of compulsion, eliminating the serenity, tranquility and calmness inherit to peace.

So how to achieve both is the ideal for which God has led us, and which is the messianic state!

The way is not simple, it is fraught with doubt and confusion, for nothing, nothing, but nothing, does the Yetzer Hara desire more, then we should not discover, be certain, and implement this route!

But ultimately, the Yetzer Hara himself is also part of this process, for in his every seed of doubt, becomes a seed of determination; in his every yang we get a ying; eventually culminating in absolute certainty that the way, is the ideal, is the redemption, and a heck of a lot better than the exile!

So what is this way?

In Judaism, the highest level, the level of our holy forefathers and foremothers, prophets and Rebbes was this way.

It is called becoming the merkavah, the instrument of God’s will!

Effectively, the problem with simply doing good, which seems to be quite a good thing, is that the ego takes credit; so we on one hand need a new paradigm, in which we can a. be productive / do good, and at the same time; be humble, feel like the good we do, was really God’s doing, not ours!

What’s so bad about taking credit you may wonder? Simple; ego = delusion = expectations = disappointment = anger = resentment = destructiveness; and this is how all the evil in the world has been created.

O.k. settled that one, so how does one become a merkavah?!

Ultimately, it is not up to you!

Ultimately, though I don’t know this, but I think this is correct – it is only after we have fully disassociated, regurgitated and in fact become repulsed by the meaninglessness, the emptiness and the existential loneliness of our modern secular materialistic culture, does this occur – and when it does, when as Oprah says, “My goal in life is to be true to the voice of God within me, for me” – it is clearer than day, stronger than conviction, more true than truth!

And this is how the opposites unite, for when you do good because God tells you to, you cannot take credit! and it is precisely this tranquility, of being subservient, of not being in charge, that both provides peace and egoless productivity!

There are three things we need, to have inner tranquility:

The first is purpose – best described as dedicating our lives towards helping others – not a donation, rather a full fledged dedication, i.e. my life is only about helping others.

The second, is we need to trust that all that occurs, is run by a God who is constantly advancing both our materiel and perhaps more accurately our humility, our goodness, our soul; which is the truth (for when we know things are good even if they are painful – say going in for a root canal – we still are willing to accept and even embrace it!) Additionally, love is the juice of joy, so think about all that you can identify (we come from the same source, God) and all you can admire, in your fellow man! in fact, in the world around you, as well!

And finally anger, pride, is the stuff of mental shutdown, for if these viruses get inflamed, our minds and hearts cease to see anything that is lovable, rather all that is putrid; and there is only one way, and that is to realign ourselves with a new identity, namely, that we are not our bodies which in any event are literally new cells every seven years; which according to both science and mysticism are literally gone and recreated every micro second (as atoms are;) which eventually get eaten by worms (sorry to be graphic, but you need to have a motive in reidentifying;) hence we are – as is proven scientifically and mystically – our souls! – a literal part of God! which as God is eternal, so our souls are eternal!

I recently moved to an apartment with a gorgeous view.

It’s such a pleasure to type as I see mountains, and palm trees, and the clear blue skies, with the fluff of some cotton clouds.

It made me realize that when we see beauty it lifts the spirit!

But then it made me realize, in life we also need to have hope!

In life, in general, if our feeling is that people or life etc. etc. is rotten, then of course we will feel rotten!

But if we believe, as Chassidus teaches, that people are in essence the goodness of God (it is only fear that causes them to act wild, as we see in children) if we believe that the world is not rotten rather God is simply allowing people the discernment of they themselves beginning to reject that which is meaningless for that which is meaningful – if we begin to imagine how a tiny sperm cell grew from one idea – Abraham’s monotheism, the first notion that the word is run by a loving God, giving you and me and everyone freedom of choice, so we can embrace whole-heartedly – not grudgingly – love and unity, and this tiny cell is now to a larger extent the dominant worldview – if we can see how not millions, but hundreds of millions of people are embracing this beautiful notion and the rest –as gallup predicts – is only getting stronger – if we can see that the Lubavitcher Rebbe who accurately foretold the events of our time and promised based on all Jewish sources that OUR GENERATION! shall be the first of redemption – a redemption that humanity eagerly awaits – well then, we will lift our spirit! 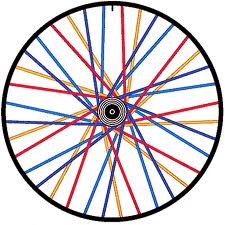 Why do people feel torn?

Because they have no center!

Imagine many spokes of a wheel, that are not attached to a center.

On the other hand imagine, you are the center – then you don’t have any problems with extra spokes because you’re centered.

When life is a series of desires, we are like random spokes, flying in every direction!

However, if we are centered, knowing that our entire existence is to transcend our desires through become a giver instead of a taker, than every spoke that relates to our center namely, eating, sleeping, going to the bathroom etc. etc. which is necessary for existence  and more importantly giving, through making money to give charity or / and the family etc. etc. creates that all these spokes being part of a center, do not split you, rather complete you!